Greetings, dear readers, and thanks for stopping by. It’s been quite a while since I last posted anything here at A Day With J., so I figured I’d take a few minutes out of a long weekend and write a quick update. The last few months have been productive but not terribly interesting, so I’ll try to make this as quick and painless as possible.

My last post was written sometime in May, which means the logical thing to do would be to tell you about everything that’s happened since June. Unfortunately, I don’t remember very much about June – OR July – and that’s probably because I took a nasty blow to the head at the beginning of August. Here’s what happened. (Be forewarned: gruesome images are coming.)

One rainy Sunday morning I was coming out of the 24-hour ATM service at my bank (pictured above). Next thing I knew, my head was bouncing off the ground like a basketball. It happened that quickly. Apparently the shoes I was wearing had exactly zero grip, and as soon as they touched down on the wet handicap accessibility ramp I fell straight back. BANG! 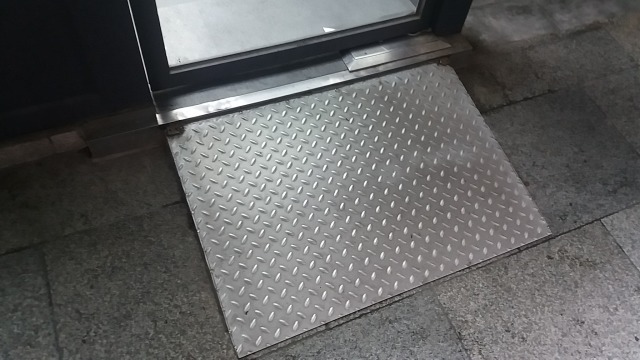 A group of teenagers walking by thought it was hilarious (may they all have a slumber party on Elm Street or go camping at Crystal Lake), but an older woman was clearly horrified. She asked me, in Korean, if I was okay, and I assured her that I was. The fall shocked the hell out of me, but surprisingly it didn’t really hurt. I was able to laugh about it, brush myself off, and walk a block or two before the first warm trickle of blood went running down the back of my neck. 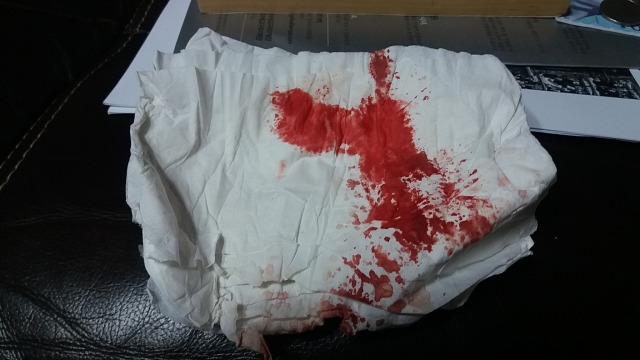 Long story short, I ended up in the emergency room at Seoul National University Hospital where I was given a CT scan and five staples on the back of my head.

In true Korean fashion, the emergency room tech told me, “Your scan is okay. There is no fracture or bleeding…But maybe in two days you will have a concussion or your brain will start to swell. If that happens, come back here or maybe you will die.” Needless to say, I took everything really slowly for the next couple of days. I also wore a swimmers cap in the shower for five days so I wouldn’t get the staples wet (doctor’s orders).

Ten days later, my staples were removed and I haven’t had a moment’s trouble since. Like I said, it never really hurt. It was just kind of a dumb thing that happened to start my summer vacation.

The rest of my time off was spent working on my long-neglected novella. As always, the first week was wasted on false starts and crappy exposition (writing is like going to the gym – if you stop doing it, you have to struggle a little to get yourself back in shape), but after a while I finally got into a good rhythm and managed to finish a difficult chapter. Next year I’ll be moving back to the States to devote my full attention to it. Wish me luck.

If you’re not familiar with Lovecraft, here’s what you need to know: he was a writer of pulp horror stories in the early 20th century. His stories are mainly concerned with indescribable cosmic beings living in the depths of the ocean or the vast reaches of space. These beings – Cthulhu being the most well-known – are often referred to as the Ancient Ones or the elder gods. The human characters in his stories usually go insane when exposed to knowledge about them. Lovecraft wrote in long sentences, used a ton of antiquated vocabulary terms (“eldritch” is a fan favourite), and was the true creator of the Necronomicon (sorry, edgy teenagers, it’s not really a book of arcane, wicked voodoo magic).

Anyway, I submitted my story (“Dol-hareubang”) and was thrilled to receive the following response a few weeks later – 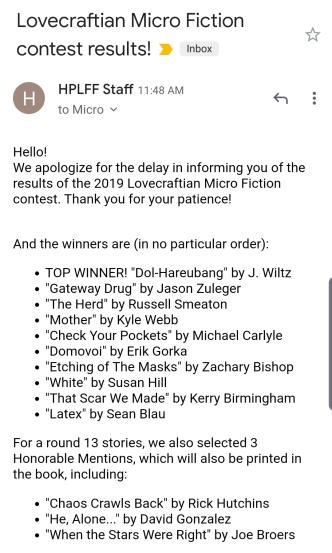 Time to Play Cowboys and Hippies

Speaking of stories, Quentin Tarantino’s Once Upon a Time in Hollywood finally came out in Seoul a couple of weeks ago. I’ve already seen it twice.

I could go on and on about the things I like in this movie, but I’ll save it unless somebody really wants to know. (Seriously, I can write a whole essay about this.) Suffice to say, it’s in my Tarantino Top 3. Who else has seen it?

I Won’t Be Home for Christmas…But…

The last thing worth mentioning is that I’ve got big holiday plans this year. Am I going back to beautiful Mother Russia?

Spending time on an island?

Finally taking a trip to India? 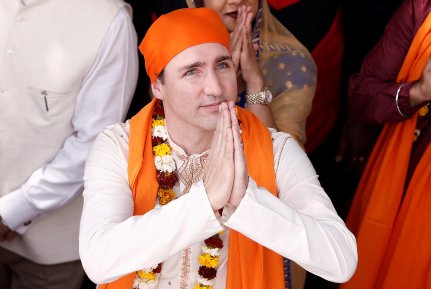 Nope. This year I’ll be opening my door to a very special guest. 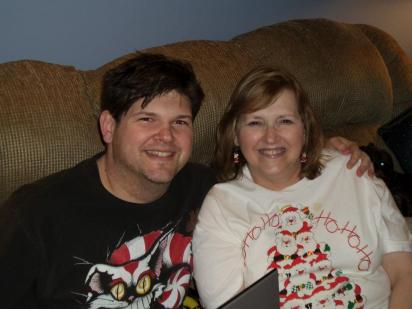 That’s right. After eight years, my mom is coming to spend Christmas with me here in Seoul. (My dad can’t make it because of health reasons.) Her flights and hotel are already booked, and we’ve got a full itinerary. It’s gonna be fun to take her around and see her reactions to everything. Does anyone have suggestions for things I might not have thought about? If so, do tell.

That pretty much wraps it up for now, gang. Please don’t hold this lazy ending against me. It’s late, I’m getting tired, and I’ll consider it a small miracle if anyone’s read this far anyway. ‘Til next time, dear readers, be well.

"Well, you know, there really isn't very much to say about me." - Andy Warhol
View all posts by J. Wiltz →
This entry was posted in Uncategorized. Bookmark the permalink.