Friday, January 6, 2017: The Roots of the Pennsylvania Pitstop

It was a classic case of one thing leading to another – and then another. In my early teens, shortly after I first discovered heavy metal and rock-n-roll, I got on this kick where I started watching a shit-ton of concert films and assorted rock-related movies: This is Spinal Tap, Pink Floyd’s The Wall, Led Zeppelin’s The Song Remains the Same, Iron Maiden’s Live After Death, Ozzy Osbourne’s Don’t Blame Me, and of course Oliver Stone’s The Doors. 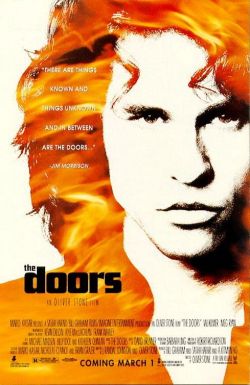 This will probably be tantamount to blasphemy for some of you, dear readers, but I’ve never been an especially big Doors fan. I mean, yeah, I enjoy “Break on Through” and “People are Strange” as much as the next guy, but for the most part I consider the Doors one of those rare bands whose greatest hits really are their best songs. I was happy to watch the movie, but I didn’t have a lot invested in it…And then something happened.

About 20-30 minutes in, after Jim Morrison (played by Val Kilmer) causes trouble on the Ed Sullivan Show but before he dies in a bathtub in Paris, there’s a scene where the Doors end up at a party in New York filled with models, celebrities, and a motley assortment of degenerates and weirdos. There’s psychedelic music blasting in the background, colored lights spiraling all over the walls, and an overwhelming sense that reality is being dangerously distorted. But forget all that. That’s just standard 1960s bullshit. What makes the scene interesting are all the sycophants floating around saying things like “Andy is not an artist; Andy Warhol is art” and “Does Andy imitate Life, or does Life imitate Andy?” 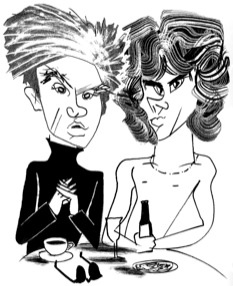 When Morrison finally encounters this monumental artist whom Life imitates, it turns out that Warhol (played by Crispin Glover a.k.a. George McFly) is something of a reluctant extrovert who speaks in a lazy monotone and uses phrases like “Oh wow,” “Oh great,” and “Oh hiiiii!” All of this is met with praise from his army of yes-men, who apparently get paid to compliment his existence and laugh at all of his lame attempts at humor. As the scene moves along, there’s an odd exchange where Jim Morrison removes Andy Warhol’s sunglasses and stares at him very seriously, to which Warhol uncomfortably responds by giving him a silver telephone so he can “talk to God with it.”

I believe the idea here is that Morrison is the “deep” artist-poet-guy trying to peek behind Warhol’s shallow plastic exterior – the real artist calling out the phony. And yet, the only thing I wanted to know when the movie was over was, what the hell was that weird scene all about? Who was Andy Warhol? I’d heard his name before, but I knew next to nothing about him at the time.

True to form, I jumped right into my new interest with both feet, reading books, watching documentaries, and looking for other movies that featured Warhol as a character. The more I learned, the more I identified; and before long I was imitating his film techniques in my camcorder movies, hanging his picture on the wall of my freshman college dorm, nicknaming one of my gal-pals “Edie,” and sporting two t-shirts – one that said “Famous” and another that said “Superstar” – that I ordered from the Andy Warhol Museum. I made up my mind that I would visit this museum someday, a decision that put one of America’s major cities near the very top of my bucket list: Pittsburgh, Pennsylvania.

So it worked out really nicely when my old friend/former radio show co-host Keith – now a hotshot airline owner/executive – ended up moving to Pittsburgh for his job. I had five weeks off for my Christmas vacation and Keith knew just how to nab one of them. “Why don’t you let me put you on a plane and have you come up here for a week?” he suggested via Skype. “We can go to the Warhol Museum.” I was there.

On Friday, January 6th, my flight touched down in Pittsburgh, where Keith was waiting at the airport to give me some quick history about the Immaculate Reception – 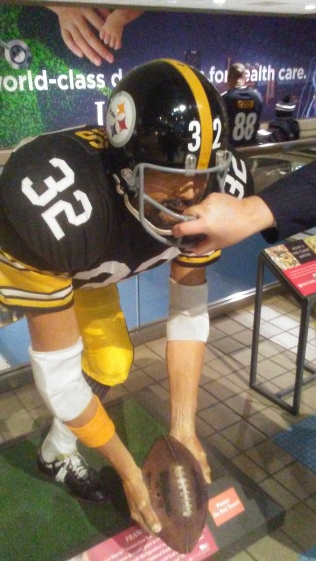 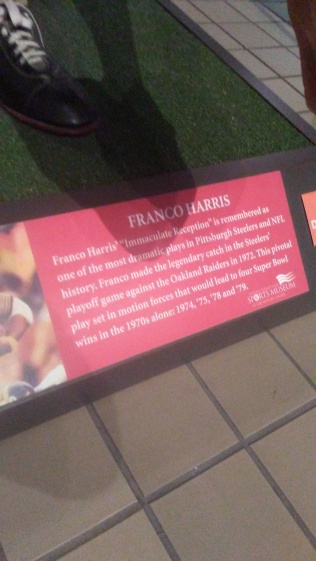 and take me to dinner at a place called Ritter’s.

We hadn’t even stopped the car and I already felt at home. 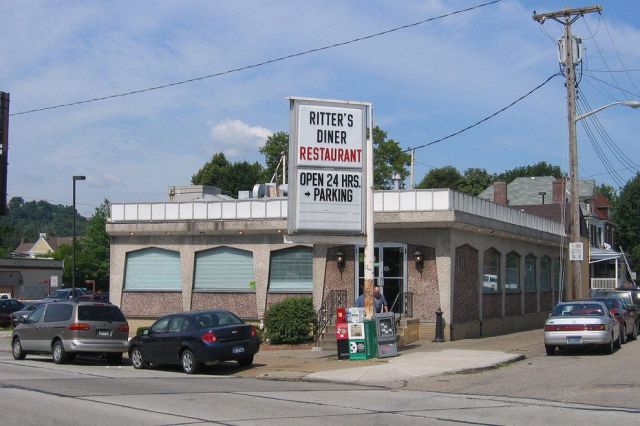 Ritter’s turned out to be a greasy spoon similar to the diner in Pulp Fiction or the old Tiffin Inn in New Orleans (R.I.P.). A stand-alone Waffle House. Sitting there, cheeseburger in hand, listening to the waitresses and their regulars talk about the Steelers game on Sunday, I began to get the impression that Pittsburgh was just a very big small town filled with hardworking blue-collar people.

“Something just occurred to me,” I told Keith. “This city is what America looks like on TV.” Keith said he’d made a similar observation when he’d first arrived.

“The bars around here are what I call ‘Dan Conner bars,'” he said. “No joke, the whole city looks like Roseanne. You’re gonna love it.” He then proceeded to lay out our itinerary for the week before telling me all about his brilliant plan to propose to his girlfriend Ashley on Groundhog Day. Cheers to that. L’aventure commence.