And then came Grand Finale Thursday, the event that turned my attention to Pittsburgh in the first place. Yes, after 20 years and one week, the day had finally come for me to visit the Andy Warhol Museum. 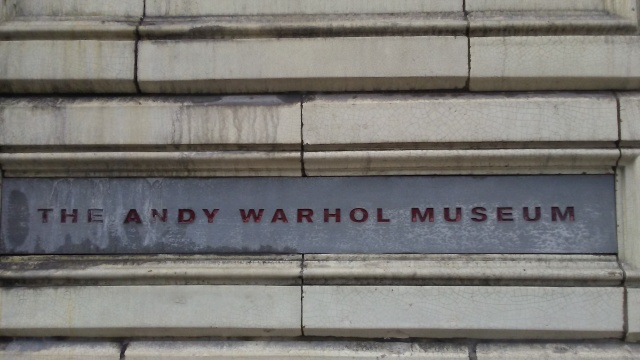 The day started off with Keith handing me his car keys and announcing, “I don’t wanna see that shit, but I don’t wanna rush you through it. Go down there, take your time, and call me when you’re done.” A part of me felt bad for leaving him behind, but the other part was like, Awesome. I’ve got the whole place to myself! I took a few wrong turns and got lost a couple of times before I finally made it, but once I saw the parking lot with the Brillo box attendant stand I knew I was in the right place. 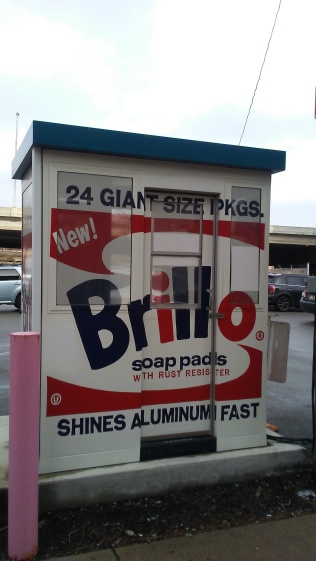 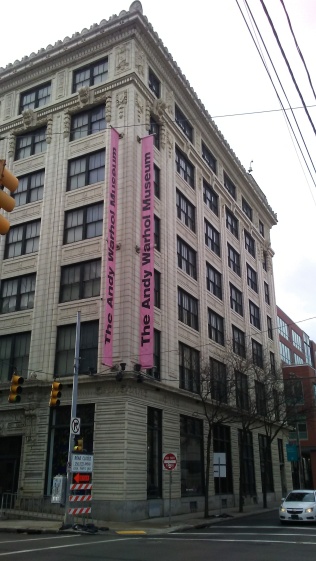 The first thing I spotted when I stepped into the lobby was a large picture of Andy Warhol lying on his famous red sofa. Directly below this picture – creating a nice Warholian “copy” effect – was the sofa itself. 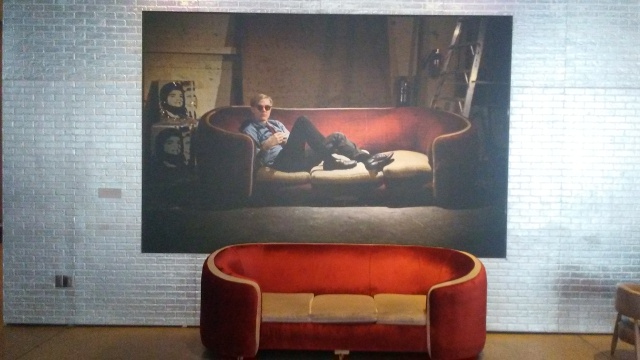 Warhol’s friends often accused him of being cheap – no doubt a side effect of his growing up during the Great Depression. His critics often accused him of tricking or conning people into believing ordinary objects were works of art. If you felt so inclined, you might think of this sofa as a combination of those two things. A top-tier art museum (the largest single-artist museum in the world) is saving money on furniture by having guests sit on a 50-60 year old sofa. I love it.

Inside the museum itself, Warhol’s artwork was arranged chronologically by decade, beginning with the early work he made in art school and later as an illustrator in New York.

The work he is best known for, it goes without saying, was made in the 1960s. This was the period when he made his famous Campbell’s Soup and Coca Cola paintings, as well as his three-dimensional Brillo and Heinz Ketchup boxes. (Pop quiz: where is the Heinz Company headquartered? Could it be in Warhol’s boyhood home of Pittsburgh, PA?) 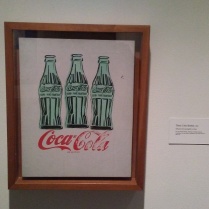 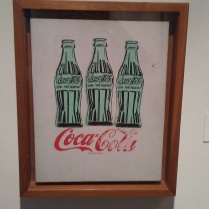 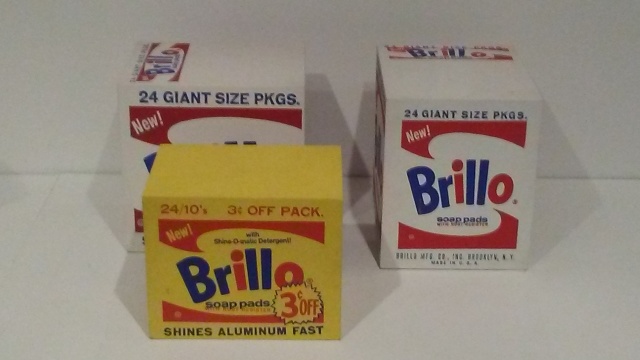 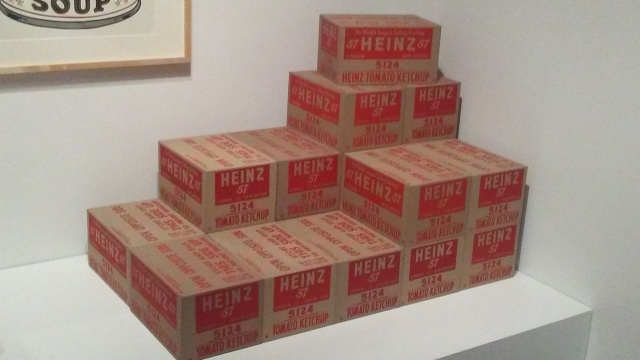 He also painted a lot of celebrities during this time, including Marilyn Monroe, Jackie Kennedy, and Elvis. 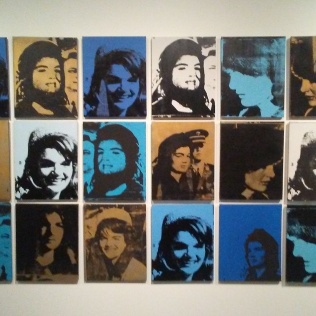 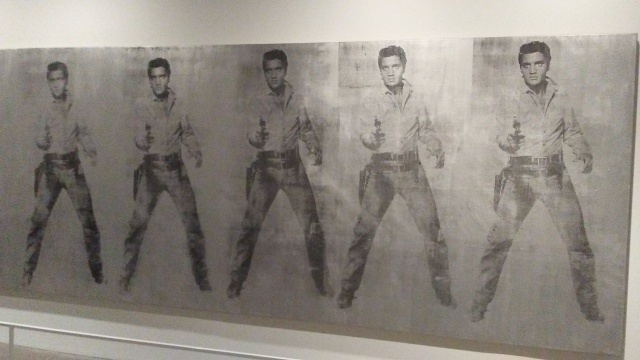 Another of his most famous images from this era was the Velvet Underground & Nico album cover. 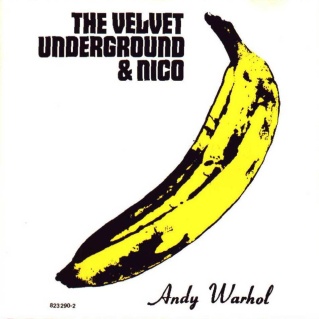 The Velvet Underground was the house band at Warhol’s studio, “The Factory.” (Who but a Pittsburgh native would give an art studio such an industrial-sounding name?) During Factory parties, the Velvet Underground would play music while multiple Warhol films were projected on walls around the room. This is what was happening in the scene from The Doors that I mentioned in my prologue. The Andy Warhol Museum has an entire room set up to recreate this experience.

The other floors are largely dedicated to the portraits and character paintings Warhol made from the heyday of Studio 54 in the late 1970s until his untimely death in 1987. 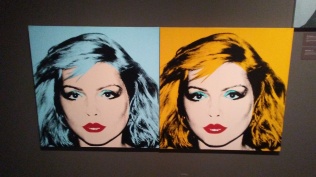 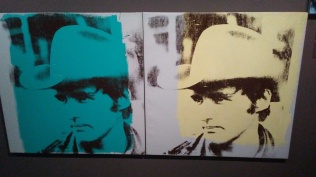 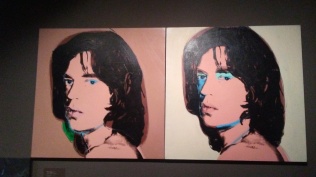 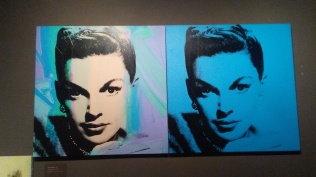 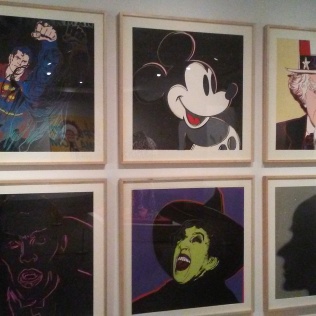 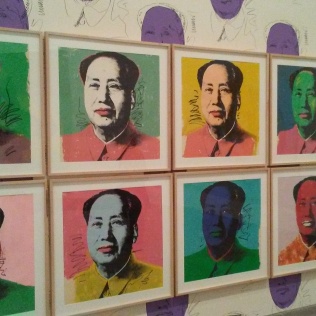 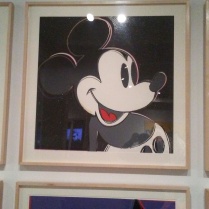 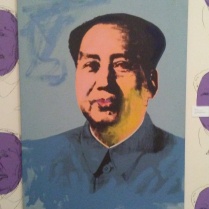 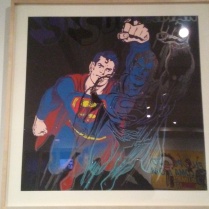 My favorite part of the museum was the part that was probably easiest to miss. Off to the side, sort of hidden away in a corner, was an audio-visual room where you could sit down in front of a television and watch virtually any movie or television appearance Andy Warhol ever made. 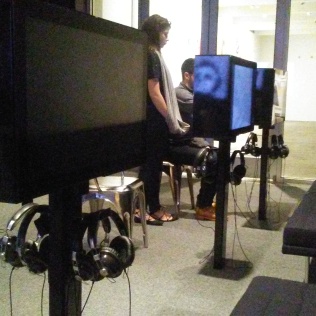 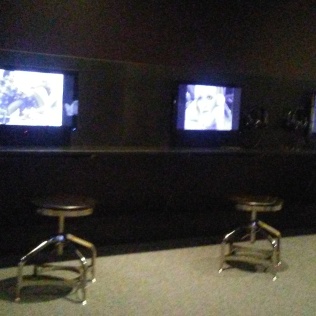 This little room was a great relief to me. Anyone who’s seriously interested in movies has undoubtedly heard about Warhol’s underground films from the 1960s – like Poor Little Rich Girl (starring the beautiful/tragic Edie Sedgwick) and Empire (a single eight-hour shot of the Empire State Building) –

but these films have never, to my knowledge, been officially released to the general public. There are a lot of umpteenth-generation bootlegs on YouTube, but I had to wonder if the original reels still existed or if maybe they had been lost or destroyed sometime during the last 50 years. I guess not. All of them were at my fingertips at the Andy Warhol Museum, along with a large selection of “screen tests.” (Warhol asked everyone who visited the Factory to stare silently into a camera for 3-5 minutes.) Here’s Bob Dylan’s. It’s interesting to watch, because he and Andy Warhol hated each other at the time and he was obviously pissed off.

I was there for at least 4 hours before I finally forced myself to leave, but that wasn’t the end of the adventure. First I drove back to Keith’s place and told him there was one more thing I wanted to see. Not too long after, we were driving through the rain looking for a Byzantine Catholic cemetery in Bethel Park. 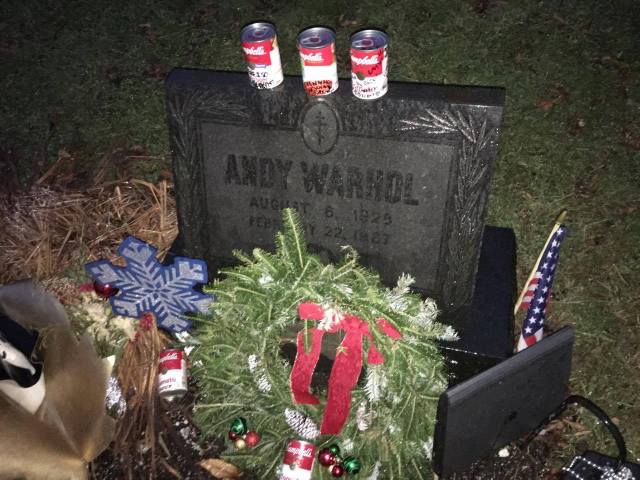 Andy Warhol’s burial site. No, we didn’t put those soup cans (or anything else) there. 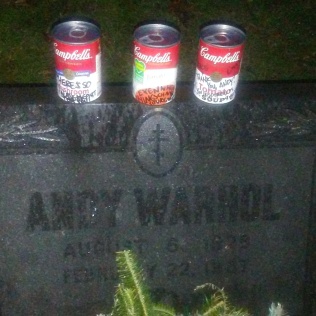 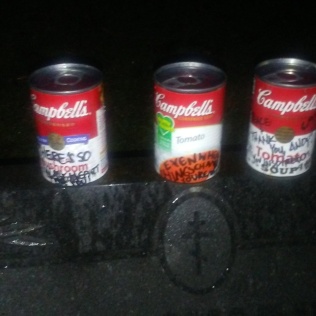 We were so stupid, dear readers. When we first pulled into the cemetery we saw a few cameras mounted to a post and (correctly) assumed they were there for security reasons. Then, after we parked, we devised an elaborate plan to split up and look for Warhol’s grave, complete with signals we would send each other once we found it. We must have walked around with our umbrellas for at least three or four minutes before realizing he was “probably” buried near the cameras…Because why else would this little cemetery even need them?

And we were right. The line of the cameras led directly to his headstone, which, in true Warholian fashion, can be viewed online 24 hours a day. His parents are buried directly behind him, though their headstone bears the original Polish spelling of their last name: Warhola. 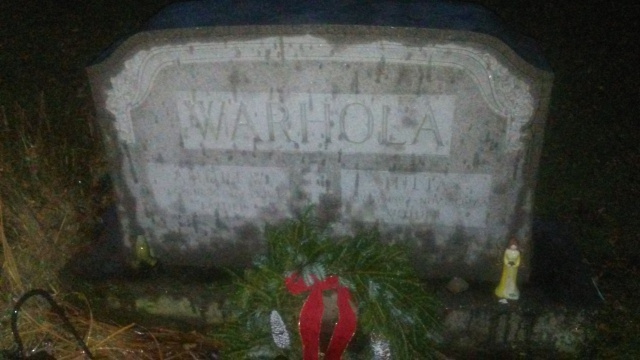 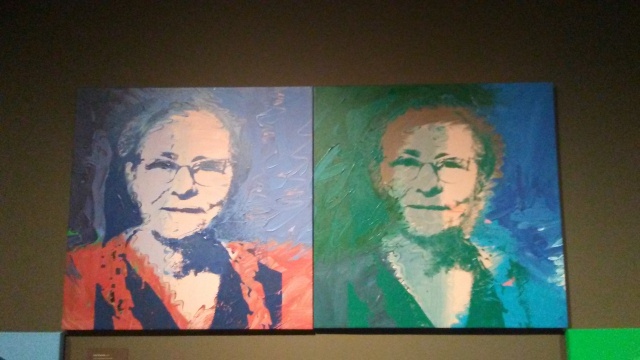 Andy’s portrait of his mother Julia.

I’m glad I saw these Warhol sights on my last day in Pennsylvania. I don’t know if I would have fully appreciated them if I had seen them any sooner.

After decades of learning about him, I can tell you quite a bit about how his art is popularly interpreted, how he profoundly influenced modern culture, and how he basically invented the art of trolling the media (video below):

But in order to get a truly good look behind Andy’s sunglasses, I think I had to visit Pittsburgh first. I read somewhere that he was confused when someone first proposed the idea of opening his museum in Pittsburgh. Why not New York, the city where he lived and worked for the great bulk of his professional career?

It’s a good question, but the answer makes sense once you’ve been there. So much of what made Warhol successful – the brands he depicted in his art, his work ethic, his industrial style of art production, his glorification of ordinary things – is firmly rooted in his Steel City background. It was only right for him to come home. 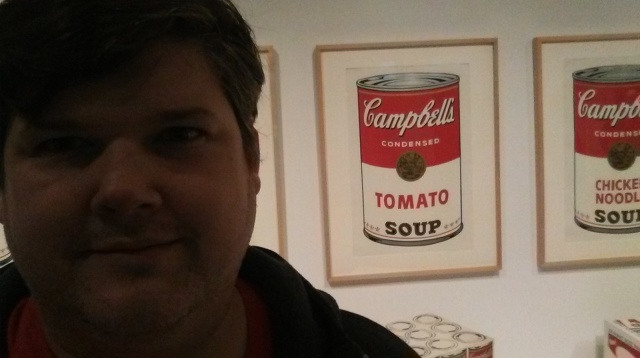 Your Humble Narrator attempts a selfie in front of Andy Warhol’s most famous work.

After paying our respects, Keith and I went and had our last supper at an incredible German restaurant. Lots of meat, cheese, accordion music, and waitresses in sexy Bavarian outfits. A meal fit for superstars. If Andy Warhol had been there, I’m sure he would have agreed that it was greeeeaaat. 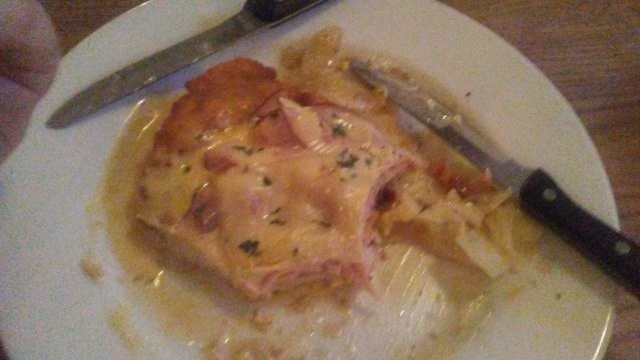 The next day I said farewell to Keith, Ashley, and Presley and flew to New Orleans on an incredibly affordable Allegiant flight. (That’s right. I boarded a flight on Friday the 13th. I ain’t superstitious.) When I landed, my old buddy Giuliano (of Mount Fuji fame) picked me up at the airport and drove me straight to the horse races. The next morning we went to Biloxi, met up with our long-MIA friend Steve Morris, and had lunch at the Olive Garden with my mom.

As for Keith back in Pennsylvania, well… 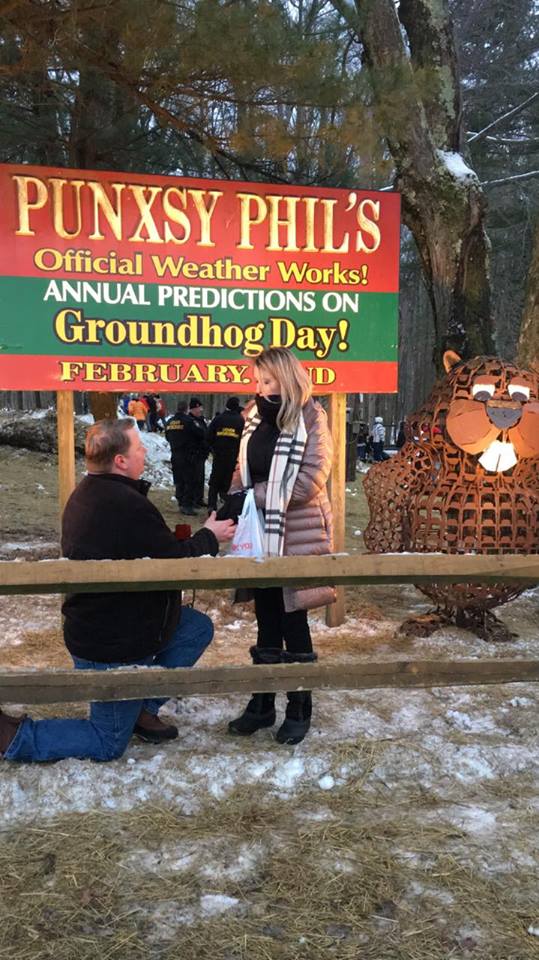 she said yes…But only after she said, “What the hell are you doing, Keith?” 🙂

Looking back on my time in Pennsylvania now, I can say with absolute certainty that Jackie O (a character in Wendy Mcleod’s The House of Yes) was wrong when she said all those terrible things about it.

Pennsylvania is not “just this state that gets in your way when you have to go someplace else.” It’s actually a great state filled with good people, awesome sights, and a wide variety of amazing food. A very worthwhile place to make a pitstop.