The Day the Greatest Died

When future generations look back on 2016, they’ll probably refer to it as “The Year We Do Not Speak Of.” In addition to an absolute embarrassment of a presidential race (not that there’s been a presidential race in the last 20 years or so that hasn’t been embarrassing), this year has given us back-to-back-to-back deaths of some of our greatest entertainment legends. First David Bowie. Then Prince. And now, Muhammad Ali.

Coincidentally, I have been in the same room as all three of these men in my lifetime. In fact, in 2004 I saw David Bowie and Prince in the same weekend – Bowie on Friday, Prince on Saturday. 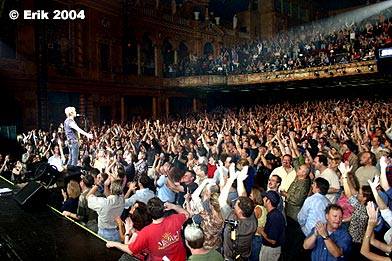 Here’s a pic from the David Bowie concert. That’s me in the front row, wearing a red shirt. Wendy (my ex-fiance) is in front of me.

Both put on amazing shows, but neither could compare to the experience of watching Muhammad Ali walk to his ringside seat at the Mississippi Coast Coliseum.

As I’ve mentioned in other posts, boxing is the only sport I’ve ever had any genuine interest in. That doesn’t mean I don’t like other sports –  the New Orleans Saints were just part of the fabric of growing up in Biloxi, and I had lots of fun watching Ole Miss Rebel football, baseball, and (especially) basketball in college – but boxing is the sport I really care about. Chalk it up as a side effect of growing up in the Mike Tyson era with a family full of boxing fans. My dad never missed an opportunity to talk about the great fights of the ’60s and ’70s, take me to local amateur bouts down at the community center, or hold Sunday-long Rocky marathons.

So when Muhammad Ali’s daughter Laila (also a boxing champion) had a bout at the Mississippi Coast Coliseum in August 2003, it was a given that we would be there. Laila’s fight didn’t start until sometime around 7:00, but we showed up at 5 to beat the traffic and watch the no-name undercard fights. As more and more people began filing into the Coliseum, we’d hear occasional bursts of applause as various boxing celebrities were spotted walking in. I’m pretty sure Michael Buffer was there. So was Roy Jones Jr, who got a nice ovation from us, his fellow Gulf Coast natives. But holy shit, when Muhammad Ali arrived the place erupted.

The Coliseum had always seemed like a big place when I was there for concerts – Megadeth, Rob Zombie, The Smashing Pumpkins, Marilyn Manson, Aerosmith, Prince – but it didn’t seem big enough to hold Ali’s presence. That’s not an exaggeration. Ali wasn`t one of those `just like everybody else`public figures. He was a legend and an icon, a man made for soccer stadiums and Madison Square Garden. Judging from the intensity of the emotion and affection coming from the crowd, I don’t think anyone could really believe that he was sitting in our hometown arena. This wasn’t a celebrity sighting; this was a genuine brush with Greatness.

I wasn’t close enough to shake his hand or say anything to him, but I remember that he was gracious enough to sign things people were handing to him as he walked to his seat. And best of all – the memory that really sticks with me from this experience – the two undercard boxers in the ring actually stopped fighting so they could watch him too. What can I say? The man was a peacemaker. 🙂

The day before his death was announced, Ali was part of the discussion in my second grade reading lesson. The students were reading the story of the tortoise and the hare, and I explained to them that while it’s not good to be a cocky asshole like the hare, it IS okay to have confidence and believe in yourself. To illustrate, I showed them a quick video about Muhammad Ali and ended the lesson by having all of them say “I am the greatest!”

Rest assured, there will never be another like him.
R.I.P. Muhammad Ali
And by that I mean Rumble Young Man Rumble in Peace. 🙂