“What about China? Have you seen the Great Wall?”
“All walls are great if the roof doesn’t fall.”
– from Dancer in the Dark 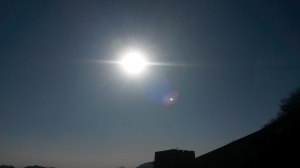 On my final day in China I woke up bright, early, and fully clothed. Not because I’d passed out in what I was wearing the day before, but because I had to be downstairs in the lobby at 6:50 a.m. to catch a tour bus to the Great Wall. A few hours earlier, I’d gotten a confirmation call from a tour guide named Leo, who’d made it clear in the nicest way possible that he didn’t want to wait for me. The bus would arrive at my hotel just before 7 a.m. and I needed to be there when it got there. Easy enough. My alarm rang, and I hit the ground running.

The first hour or so on the bus was spent driving around to other hotels in Beijing, picking up the other tourists. I remember feeling a little jealous of one family because their hotel had a cool statue of a winged lion outside.

Note to self: I must remember to mention this on the comment card I fill out at the end of the trip. “Everything was wonderful. My room was clean and comfortable. The food and customer service were great. I would stay here again and recommend your hotel to my friends. 4 out of 5 stars. (I would give you a 5 if you had a cool winged lion statue outside.)”

Our first stop was the Ming Dynasty Tomb.

I’ll be honest, I don’t remember very much of what I saw and learned here, except that the landscape and weather were both very beautiful. More importantly, the tombs marked the spot where I first said hello to Scott Johnson and Jamie Rae Blackburn.

Up until that point, I was mentally referring to them as “the other white people” so it was nice to put names with faces. As it turns out – small world! – Scott (from the UK) and Jamie (from Minnesota) were also English teachers in Korea. Comparing notes on the bus, we found that we liked and disliked most of the same things about Seoul and China. As a result, we buddied up for the rest of the tour.

After the tombs, we were taken to some sort of shopping center that specialized in jade ornaments and jewelry.

Leo was adamant that we look around and buy something to take home (I’m assuming he probably got a commission), but we mostly just stared at the paintings for sale at a corner kiosk and watched some overweight fish swimming around in a tank. They reminded me of the fish at House of Chin. 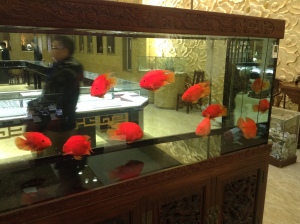 From there we were off to lunch, which was where we first became acquainted with most of the other people on our tour: a family from Sri Lanka, a couple from Georgia, some art professors from South Africa, and, if memory serves me correctly, a man from somewhere in the Middle East who’s now living in California. It was a very nice time, and the Leonard Cohen fan in me was ecstatic to realize that we were in fact having tea and oranges in China. 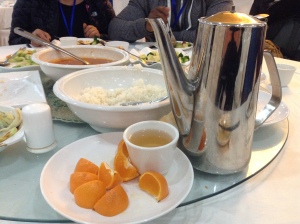 But, as all things most surely have to end, our nice lunch was dampened by Leo’s sudden announcement that we would need to pay an additional 100 RMB to get to the top of the Great Wall. The bus, he explained, could get us to the Wall, but getting on the Wall was a different story altogether. This led to a slight mutiny among us tourists who hadn’t been told anything about this additional fee. Before long there were conspiracy theories swirling around that Leo was pocketing this extra money. He seemed almost angry when several people complained. “If you don’t want to pay you can climb up, but that might take you an hour. We are only here for two hours. You will not get to see anything.”

Scott and Jamie, clearly braver than I, took him up on this and opted to climb. (They later reported that it took them all of two minutes to get onto the Wall.) Personally, I wasn’t happy about the extra fee, but I was afraid I’d get lost or take too long climbing up and miss the whole thing. So, I paid the money and went up on a little car attached to a metal track. It was kind of like a roller coaster, which took some of the sting out of the situation.

Finally, the grand finale of my Chinese vacation – I was standing on the Great Wall.

The original purpose of this wall, as most people know, was to protect mainland China from hostile Mongol invasions. Scott, Jamie, and I had a good laugh on the bus, wondering how effective this method really was. After all, it’s hard to imagine the Mongols wreaking havoc across Asia, mercilessly slaughtering everything in their wake, raining down death and destruction on everything they see, and then suddenly giving up because they, quite literally, hit a wall. “Aww shit,” their generals probably said, “there’s a wall here. Did anybody know about this? It’s not on the map. (long, confused pause) Oh wow, this is embarrassing. We did not see this shit coming. Wow. (another pause, followed by a sigh of resolution) Fuck it. Let’s call it a day, fellas.” 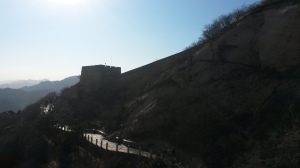 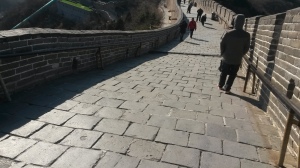 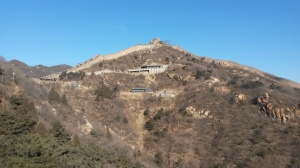 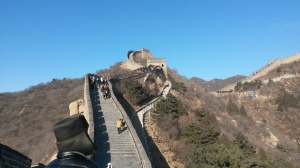 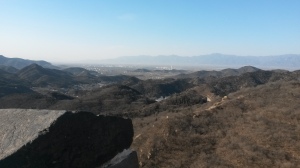 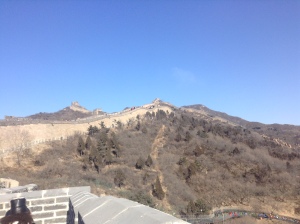 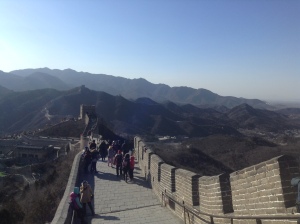 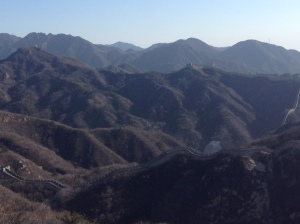 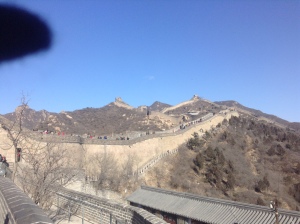 Coming off of the Wall a couple of hours later, I was surprised to see what I believe were Sun Bears in two enclosures next to the souvenir stands. I’m not sure exactly why they were there. My best guess was that the bears lived in the area surrounding this section of the Wall and, rather than killing them off, the Wall authorities built a home for them and made them part of the attraction. 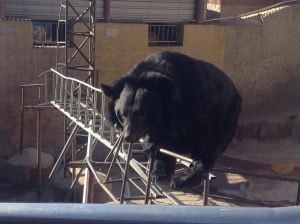 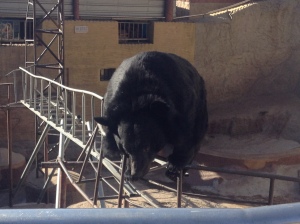 On the bus ride back to Beijing, a teenage boy from the Sri Lankan family started asking me about -of all things – the drug culture in the USA.

“Do lots of people do drugs?” he asked. Yes, I told him, drug use is very prevalent in some areas.

“Do you take drugs?” I got high once or twice right after high school, but I was never very interested in it. In fact, I’m a lifelong non-smoker and I don’t drink very much. This seemed to disappoint him a little.

“Do you think I can get drugs if I go to the USA?” I was absolutely certain he could, especially now that marijuana is being legalized in a lot of places. I support that, by the way. I believe people should be free to put whatever they want into their bodies. I also think drug addiction should be treated as an illness instead of a crime.

“I take drugs in Sri Lanka,” he said. I told him I understood his desire to experiment and be rebellious, but I hope he realized there were more important things in life and that drugs could really hurt him if he wasn’t careful. I doubt any of this got through to him, but it was nice to think I was dropping wisdom on some dumb kid to start the new year.

Our last stop was a Chinese tea ceremony where, once again, Leo strongly encouraged us to buy things. 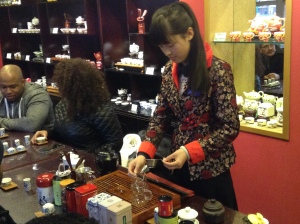 The tea was great, but I was at the end of my budget and didn’t feel like bringing any home. Plus, the woman conducting the ceremony kept getting angry with everyone at my end of the table for talking and giggling during her presentation. Not the way to open my wallet. (Note to all budding entrepreneurs: anger is not a good sales tactic.)

Following the tea ceremony, I bade farewell to Scott and Jamie as they headed off to find afternoon drinks. As for me, I went back to my hotel, savored one last meal at the buffet, and started packing for my early flight the next morning. With no hassle, I got my deposit back (minus the amount that was deducted for my meals) and used it to pay for a cab to the airport.

Startling true confession: I was kind of an asshole to the girl at the ticket window when she couldn’t find my flight information right away. It wasn’t really her fault though. The truth was, I hadn’t properly planned for my departure and wasn’t sure exactly when I was supposed to leave. The stress came on thick as I imagined myself missing my flight and being stranded in China. 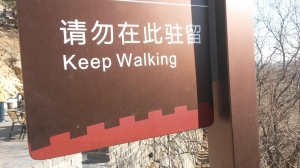 But, in the end I was directed to another window where my tickets and boarding passes were printed, no problem. I sailed through security with North Korean money in my pocket and still had time for some last minute gift purchases before I boarded a plane in a country I really liked and flew home to a country I truly love.

Thank you and farewell, China.
Good to see you, Korea.
“Home is the sailor, home from the sea.”

"Well, you know, there really isn't very much to say about me." - Andy Warhol
View all posts by J. Wiltz →
This entry was posted in Uncategorized. Bookmark the permalink.